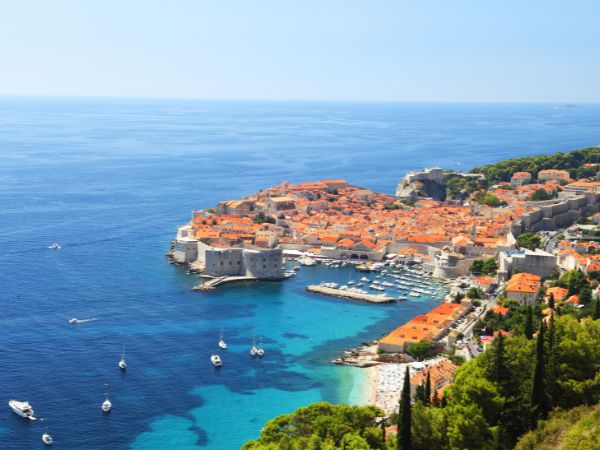 Buza II and Buza I are cliff bars that are hidden beneath the walls of the Dubrovnik Old Town. Buza is the ideal spot for a refreshing afternoon beverage or sundowner with stunning views. The cliff bars are a hidden gem in Dubrovnik and must-see activity in Old Town. They offer cold drinks, cliff jumping, and incredible ocean views.

Buza II and Buza I

Buza II and Buza II, which translate literally as “hole” and “hole II”, are Dubrovnik’s cliff bars that can be accessed through a hole in a wall. These simple entrances don’t do justice to the beauty that lies beyond. The cliffside is lined with Buza patrons, who enjoy a drink, a swim, and stunning views of the Adriatic Sea as they emerge into Buza. One of our favorite things to do in Dubrovnik is to have a drink at one of the Buza bars.

Buza, the original Dubrovnik rock bar, has a seating area with tiers and is very close to water. You can cool off by taking the steps down to the ocean. Some customers are brave enough to jump off the rocks.

Buza II is a smaller terrace higher than the sea. A wall stating “No nudists” leads to the entrance. Although it is possible to swim between Buza II and Buza II, the higher vantage point allows for fewer jumps in or swims from Buza II.

What to Expect at Buza

Both the Buza Bars, which are located on the cliff below the city walls and are simple in design, are simple. Although the Buza bars offer incredible views, they are primarily about enjoying a cold beverage and breathtaking views. Buza promises nothing more, and that is what makes it so special.

Although the prices are higher than in other parts of Dubrovnik Old Town, they are still affordable. Buza has very basic facilities and services. There is a limited selection of drinks available, including beer, sodas, cider, wine, and water. Mixed drinks are not offered and drinks are served in plastic cups.

Buza II is very similar, but drinks can also be purchased in glasses.

When is the best time to visit Buza?

We love sunset, as the Dubrovnik sunsets make it our favorite time to visit Buza. The endless views make it beautiful even during the day. The moonlight illuminates the ocean and the Adriatic waves lap against its cliffside.

How to get to Buza Dubrovnik

Buza II and Buza I can be difficult to find. They are found through two holes in Dubrovnik Old Town’s outer walls. Although the Buza bars can be easily seen from the city walls, it is easy to get lost in Old Town streets trying to find them.

It is easiest to get both bars by walking a short distance from the Church of Saint Blaise, at the Stradun’s end. This is where you will start your walk. Head up the steps to the Rectors Palace, which is on your left. Continue on to the Dubrovnik Cathedral by climbing the Jesuit Stairway.

This is where the route for each Buza Bar diverges.

How to get from Buza

Take the street to your left, as you approach the Dubrovnik Cathedral entrance. Continue on this street until reaching the outer city walls. You will see a small gate within the wall. This is where you will find the entrance to Buza Bar.

How to get to Buza II

Buza Bar (named Buza Bar on the Map): Buza Bar II is a slightly more difficult route, but it is a short walk from the cathedral. Continue along the south side dubrovnik cathedral to the street. Continue straight, passing two street crossings. The street will then turn to the left. The street will run parallel to the wall. You will find a small gate made of black metal at the wall’s entrance. This is Buza Bar II’s entrance.

How to Choose the Good Nightstool